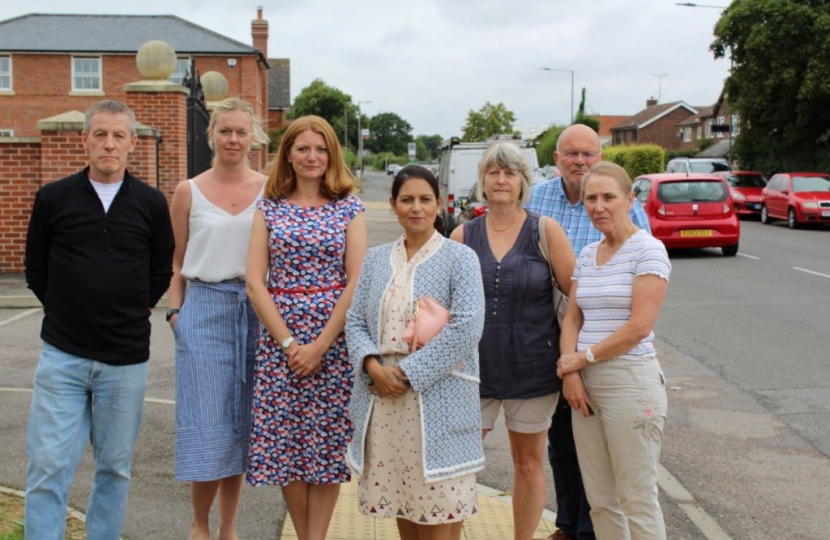 The Witham MP, Priti Patel has today (19th July) visited Copford to assess a long term nuisance parking problem that has plagued the area for several years, creating particular hardships for local residents. Contractors’ vans and commuters travelling from Marks Tey Station are parking on both sides of London Road and neighbouring streets in Copford, to avoid parking charges at the designated Station car parks, causing traffic congestion and making it extremely hazardous for residents to safely access the road from their own properties, as their view is always obstructed by parked vehicles.

Priti, who listened to residents’ concerns during her visit, said: “There has been a great deal of correspondence going backwards and forwards on this issue but very little progress. In the interests of road safety, there is a strong need for parking restrictions to be introduced and the relevant authority is the North Essex Parking Partnership (NEPP). NEPP reviewed the situation in 2016 and determined that the roads involved are wide enough to accommodate the parking and there was no need for new parking regulations.

“This is vigorously contested by local people who point out that buses and HGV’s cannot pass each other because of the parked vehicles, which causes chaos. Residents are also regularly on the receiving end of abuse for backing out of their driveways, all but blind, into oncoming traffic. NEPP agreed to review their decision and has been consulting with the local Parish Council but that was at the turn of the year. My objective today was to get things moving again. I gather that a new submission is soon to be submitted to NEPP and it has my full support. ”

Cllr Jackie Maclean said: “This is a serious issue that has been plaguing the area for years and it will only get worse with new housing developments on the horizon. I am more than pleased to work with Priti toward getting some action to alleviate the situation, before something serious happens.”

Local resident, Lisa Clarke, who first drew the issue to Priti’s attention said: “This is a serious issue and it feels like nothing is going to be done until there is a serious accident. I am grateful to Priti Patel for coming here today and seeing for herself just how dangerous the situation is for local people. We greatly appreciate any help she can give us in getting some action to control this commuter parking problem."

Priti Patel thanks voters for her fourth General Election victory

Priti Patel has thanked voters across the Witham constituency for electing her to represent them in the House of Commons, at a fourth consecutive election. First elected in 2010, Priti has now been re-elected as Witham’s MP in the 2015, 2017 and 2019 General Elections.